A day in the mountains

Posted on Wednesday 14 Aug 2013 by jlcommeree

Last Saturday, I went along on a hike that my girlfriend Kathy organized and offered for auction to raise money for the UUSC. She provided the lunch for the seven of us – plenty of hummus, cheeses, chicken strips – pita, bread, crackers – carrots, red bell pepper, jicama – tomatoes, cherries, grapes. She packed in a load that would have taxed me to exhaustion but she motored uphill like it was a walk in the park. The goal was Melakwa Lake. It lies above Denny Creek with the trailhead off of I-90 before the highway makes that last steep climb to the pass. The lake lies on the west side of the ridge running north from Alpental Ski area – accessed via Hemlock Pass at 4600′, higher in elevation than the tops of all the ski lifts in the pass except the one serving the Edelweiss Bowl and Upper International area of Alpental. 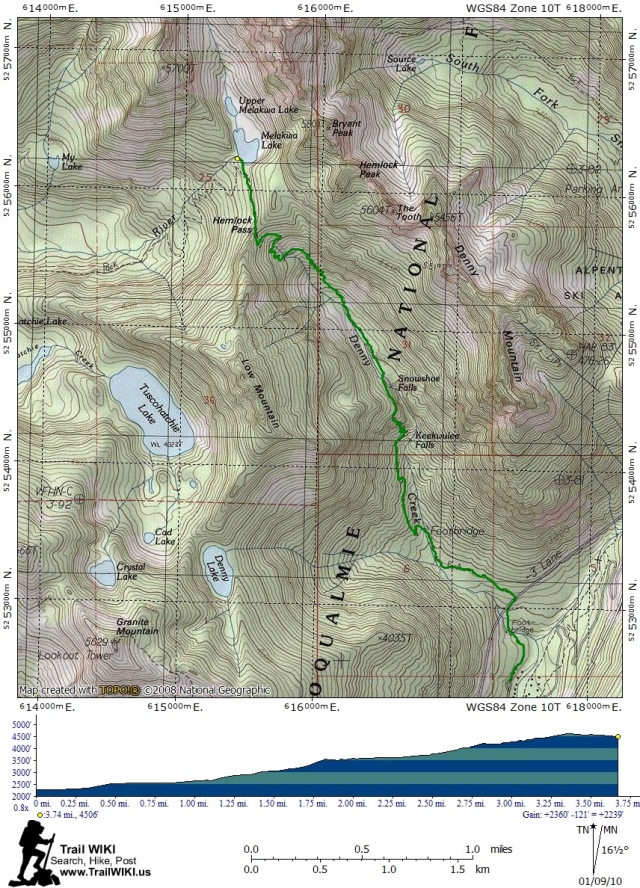 I was wearing my little Fitbit activity monitor during the hike.The next day I received two e-mails – the first congratulating me on exceeding 2000 feet, or

200 stories, of elevation gain and the second for taking more than 25000 steps that day. While that was a good workout, I still felt that I paled in comparison to my rather petite girlfriend Kathy – given the feast she carried on her back.

The night before had brought one of the more boisterous thunderstorms I remember in these parts so Kathy was worried about the weather for Saturday’s hike. Fortunately, the morning was overcast giving way to clearing as we headed to our rendezvous at the Eastgate P&R lot with clouds still draped over the hillsides as we traveled closer to the pass.

Initially our view from the trail was shrouded in fog but by the time we reached the upper reaches and crossed over Hemlock Pass and down to the lake, the sun shone brightly and the sky was blue. As we began to head back down the trail after lunch, clouds were moving in again and soon we were treated to the rip and rumble of thunder overhead. It reminded me of those early stereo sound effects LPs as the thunder emanated and echoed from one side of the valley to the other. We made it most of the way down before the rain came, our descent slowed by one of our hikers who had undergone extensive foot surgery last year. On the steeper and rocky sections of the trail (most of the upper half), she had to carefully place her feet.

The rain and thunder provided another bit of nature to savor. It was a wonderful day and I met several nice people – Kathy’s friends from the Woodinville Unitarian Universalist Church. I am looking forward to many more hikes with Kathy in the coming years.